The HDV12 German Cavalry Manual is very clear on one thing: Never, ever, ever interfere with the horse’s natural movement when jumping.

But is that still the case in modern riding? Let’s examine some modern trends versus the classical approach.

“No rider can make a horse jump. You allow the horse to learn to jump himself, then stay out of the way.” (Rolf Becher, who developed the Chiron method*).

The Origin of the Forward Seat

The ‘Caprilli seat’ — a forward-leaning versus backward-leaning seat meant to be easier on the horse — was relatively new in the first quarter of the 20th century. Cavalry officers from all over Europe were sent to Italy to learn this revolutionary seat. The German cavalry soon adopted this seat in their regulation (HDV12).

The forward seat was developed by Italian cavalry officer Frederico Caprilli, who initially faced resistance from the cavalry establishment and only earned fame and recognition after it was proven that horses were more willing and effective jumpers with the new seat.

How to ride the classic forward seat: 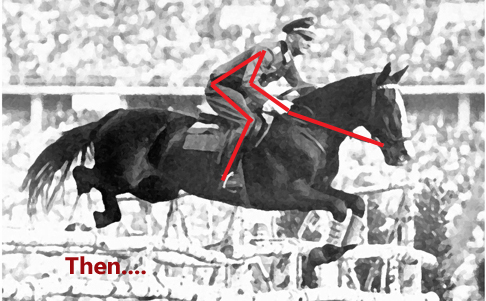 Fast-forward to the 21st century

The arrival of the ‘modern jumping seat’

While these may not be the ‘official features of the modern jumping seat’, there is ample photo evidence, that this is a very popular way to ride now.

Let’s give it a try!

The classic forward seat, that is…

Several successful riders on the international scene prove that you can have your (classical ride) cake and eat (win) it, too! Riders like Ingrid Klimke train to classical principles with the HDV12 as basis for their success.

If you are not already doing it, give it a try: Get back to classic and “get out of the horse’s way”.

The HDV12 German Cavalry Manual is an easy read with ample illustrations.
If you follow it closely, you can do no wrong, especially if supported by a caring and knowledgeable instructor.